We all know how crucial evidence is to research. Over the last year Alzheimer’s Society has been considering the evidence surrounding how it involves people affected by dementia in research. 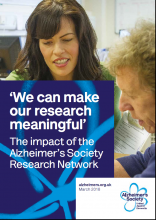 Patient and public involvement (PPI) in research is a philosophy whereby research is carried out ‘with’ or ‘by’ people affected by the condition rather than ‘about’, ‘for’ or ‘to’ people. Over the past twenty years an increasing value has been placed on including the lived experience of patients and the public in every stage of research.

Belief or instruction alone isn’t enough to change the way in which researchers work.

Researchers, more than most, value the importance of evidence to change the way in which medicine, care, services or indeed research is carried out. If they don’t see or understand the value of a change they will look for evidence to prove why they should change their ways of working.

The Impact so far

Alzheimer’s Society has pioneered the active involvement of people affected by dementia through our award winning Research Network, since 1999.

It’s clear why the Research Network is valued so highly across dementia research. Many of Alzheimer’s Society’s achievements in the research field have come about due to contributions from our dedicated volunteers. From campaigning for NICE to widen access to treatments, to increasing the focus on reducing antipsychotic use over the past 20 years, our Network has been at the forefront of making these improvements.

We often hear from researchers and our volunteers how valuable the contributions of the Research Network are.

In 2017 we decided to collect some of the evidence which we hear anecdotally and produce our first ever impact report for PPI by surveying and interviewing members of the Research Network and researchers across the UK.

We identified four important areas that have been influenced by contributions from our Research Network:

The evidence around PPI in dementia research is growing but there is still a need to improve the evidence that is in the academic domain. We have partnered with the journal Dementia to guest edit an edition due for publication in November to tackle this issue. It will bring nine new articles into the academic literature that articulate the impact of PPI, but it will crucially also help all involved in dementia research face the challenges which still remain in carrying out PPI meaningfully and well.

Moving from ‘proving to improving’

We now have evidence that backs up our belief that PPI is not only the ‘right thing to do’ but where done effectively gives a number of benefits. We can talk confidentially about how the Research Network is having an impact.

We are moving the conversation about PPI forward from ‘proving’ why it should be done to ‘improving’ how we can do it in partnership with our researchers.

Find out more about PPI, our Research Network and how we can support you and your research.